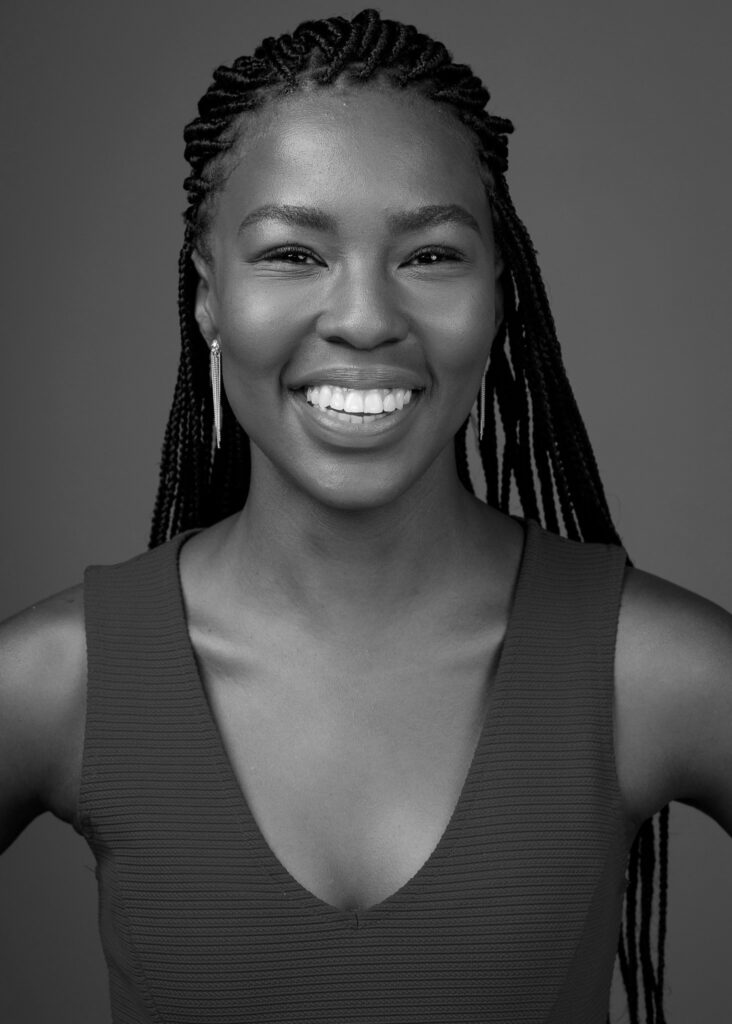 Mamello Makhetha is an actress, voice artist, singer, performance artist, producer, and writer. She graduated from the University of Cape Town with a Hons Equivalent Ba in Theatre and Performance, specialising in Bilingual Acting. She received a distinction in Acting. (2020). She is represented by Authentik Management.

As an actress she is fluent in both English and Sesotho. In her 1st Year at UCT, she played an ensemble actor in Shoko Yoshimura Coco’s P4 Directing Scene, Far Away (2016). In 2018 she played the role of Mandisa from Nothing But the Truth, by John Kani for the P3 Acting Project, Missing Pages. In the same year, she was an actor in a 2-hander melodrama realism play, Raising Sunflowers with Katlego Dikeledi, by Tshegofatso Mabutla. The play was staged at Baxter’s Masambe Theatre, in 2018. Between 2017 and 2018, she performed and co-wrote Linda Makgabutlane’s Master’s graduation production, Shacks and Yoga Mats, with Kylie Fisher. She performed and co-wrote multiple roles in Lukhanyiso Skosana’s Ingugquko. In 2019, she played the character of The Spotted Boy in Venus directed by Warona Seane.

She has been directed by Mandla Mbothwe in numerous productions over her university career. She played the Visionary Womxn in Nguvu Ya Mbegu for the P2 Bilingual Project in 2017, which she also co-wrote with her fellow actors. In 2018, she was a P3 performer in his production, called In His Quest. In 2019, she played Sarah in his P4 Bilingual Acting production called Nguvu Ya Mbegu: Entabelanga, which he also co-wrote with her fellow actors. She played Lane in The Clean House directed by Renier Nolte. She performed in Alice De Beer’s Windows Caberet at the end of 2019 at UCT. She also completed a run of Nasty Womxn directed by Dara Beth at the Alexander Bar and Baxter’s Masambe Theatre.  She played Marienne and Marienne 2 for the Gin Hedricks Activation , directed by In 2020, she performed in Vagina Monologues, staged by the Sugar Daddy Theatre Company at the Raptor Room. She played Charity in Hannah van Tonder’s The Coin, which toured to the Free State and had a run at the State Theatre in Pretoria(2021. She recently completed a run of Nguvu Ya Mbegu: Entabelanga at Theatre Arts Admin(2021).

She has been involved in various voice artist work, which includes work for both Shoprite (2018) and SARS (2018), educational videos for Inclusive Education: South Africa and SmartStart South Africa. (2019). She was also a voice for Sunjin Muftic’s 2019 geo-interactive installation walk entitled Ukubekindlebe for the Makhanda National Arts Festival’s Creative Digital Arts Festival. (2019). She was the script writer and voice over artist for the MySchoolMyPlanet Nelson Mandela Day Campaign. (2020). Her recent voice over work includes Pick n Pay, Spur, and MySchool in collaboration with Builder’s (2021). She recently did work for the International Water Management Institute and the Department of Agriculture(2022).

Her performance art career includes: She played Tina for Amiya Nagpal’s performative script in the Yokohama Triennial’s Episodo 3. (2020). She was a co-performer in Isabella Chydenius and Balindele ka Ngcobo’s  City of Ladies for the Cape Town Art Fair (2020). She was in Nguvu Ya Mbegu: The Cleansing for the UCT Decolonial Festival in 2018 directed by Mandla Mbothwe. The same performance was done in 2019, at ICA’s Infecting The City. She also performed Madi Iphidisa Madi for the same festival that year. Nguvu Ya Mbegu: The Cleansing was also performed at Alude Mahali’s conference in Cape Town that was about the relationship language has with education. She performed the piece, Un-Televised, with Grace Matetoa at Body Politic 3: Eros. A quarter annual experimental performance art event curated by Louise Westerhout. (2018). In 2018, she was in a group performance art piece entitled, UMGOWO, an experiential butoh-based performance dealing with the collective and individual conscious experience of black mental health, for Body Politic 2: Pathology. In 2018, she was a performer for an installative performance curated by Mandla Mbothwe celebrating Sindisiwe Magona’s 75th birthday. She also performed as a co-performer in Anathi Rubela’s LGBTQIA+ for their D3 Contemporary Performance Course (DRM3010F). She has been a fellow for the Institute of Creative Art’s 2020/ 21 Online Fellowship, her work is entitled Ore Phelele. It has been both a part of the UKZN Fringe Festival for the Contemporary Dance Festival, JOMBA, where it came second and the Berlin based Online Digital Festival People United directed by Hannah Ma.

Her producing career includes: production assisting for various AFDA third year graduating productions such as: How to Kill a Girl Named Amanda, Siembamba, both directed by Christian Grobbelaar. As well as, Coup De Grace directed by Bongani Morgan. (2015). She produced Verdict directed by Matthew Coxon, as an AFDA first year film. (2015). She co-produced What Would Sarah Do, directed by Tarania Naidoo for the Bokeh Internatonal Fashion Film Festival. (2018). In 2020, she was a production assistant for the Mafikizolo music video, Thandolwethu and a Liqui-Fruit TVC. She also recently production assisted for Emilie Badenhorst’s music video, Strangers, with Romance Films.